Spiritualism -- a belief in communication with spirits of the dead -- is at least as ancient as the Old Testament, wherein King Saul had the Witch of Endor conjure up the ghost of Samuel (I Samuel 28). However, modern Spiritualism began on March 31, 1848 (All Fool's Eve!). At a house in Hydesville, New York, when two schoolgirls, Maggie and Katie Fox, began seemingly to communicate with a murdered peddler's ghost using a code of rapping sounds. Although four decades later the sisters confessed it had all been a trick, meanwhile Spiritualism became a popular movement that spread across the United States and Canada and, indeed, far beyond.

The great magician and escape artist Harry Houdini (1874-1926) spent the last years of his life crusading against phony spirit mediums. They supposedly went into trances to speak with the dead (assisted by their "spirit guides" on the Other Side) or produced various spirit phenomena (slate writing, trumpet voices, spirit paintings and photographs, and apports, i.e., objects allegedly transported by spirits), including complete "materializations" in which spirit entities seemed slowly to appear. All typically occurred in dimly lit seances.

With repeated exposes, Spiritualism declined from its heyday in the latter nineteenth and early twentieth century, but in recent decades it has made something of a comeback in the form, not of the old physical mediumship, but of so-called mental mediumship. This depends largely on the technique of "cold reading," an artful method of fishing for information from a sitter while pretending to be in communication with spirits.
(For a discussion, see Joe Nickell, "The Science of Ghosts," Prometheus Books, 2013, pp. 185-255.)

Items in the Spiritualism Wing Collection 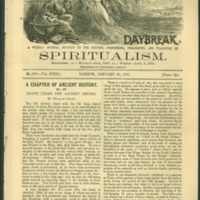 As spiritualism flourished in the second half of the nineteenth century, spiritualist groups and publications devoted to the topic proliferated.

Here is an issue of The Medium and Daybreak: A Weekly Journal Devoted to the History, Phenomena,…