Cartomancy is the term for divination by cards -- an ancient practice frequently associated with gypsies. It typically involves Tarot cards ("Tarot" being a French derivative of the Italian "tarocchi," meaning "triumphs" or "trumps"). These are 78 cards in two parts: the Major Arcana (22 separately titled picture cards, such as The Magician, The Moon, and other universal symbols) and the Minor Arcana (consisting of four suits). The cards are typically shuffled, laid face down in any of several various spreads (such as the Celtic Cross), then read by turning each one over and interpreting it based on supposed psychic ability or intuition.
Ordinary playing cards (which some say evolved from the Tarot deck) can also be used, although they of course lack the Major Arcana. Since both types of cards have four suits, those of the tarot are substituted as follows: Wands (clubs), Swords (spades), Cups (hearts), and Pentacles (diamonds). Each Tarot suit has an additional card, the Page, not found in playing cards.
(See Rosemary Ellen Guiley, Encyclopedia of the Strange, Mystical, & Unexplained, New York: Gramercy Books, 1991, 602-604.) 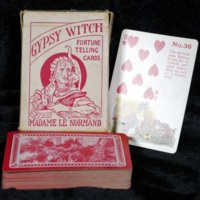 Early twentieth century, with folded instruction sheet, these cards are printed in color (by color relief printing), bearing images and text combined with playing-card designs. For instance, the Ace of Diamonds is reproduced at the upper left of one… 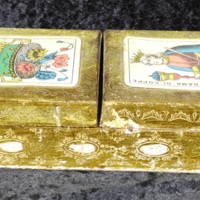 This Tarot Card box has two empty compartments, one affixed to each of the lids (which open in opposite directions). The cards may or may not have been a full Tarot deck (i.e. including the Major Arcana), possibly indicating their use for gaming. …