Extrasensory Perception (ESP) is the term for the alleged ability to glean information by means beyond the five senses -- that is, by paranormal means -- sometimes referred to as a "sixth sense." It includes clairvoyance (also called "remote viewing"), telepathy (mind-to-mind communication), and precognition ("future-knowing"). ESP and psychokinesis (the attempted ability to influence objects or events by mind power alone) are together referred to as "psi," which is studied by parapsychologists. A looser, broader term is "psychical research" whose subject matter may also include hauntings, poltergeists, mediumship, and dowsing.

By 1927 ESP was being studied scientifically at Duke University by a young botanist and his wife, Joseph and Louisa Rhine. They believed psychical research could bridge the gap between religion and science. Rhine's first published report was "An Investigation of a Mind-Reading Horse" (1929) -- a mare that they believed was telepathic; actually, Lady Wonder simply responded to secret cues from her owner who had gleaned the information from the subjects. Dr Rhine's later card tests -- in which a subject guessed the sequence of symbols from a special deck of cards -- engendered considerable controversy, but proof of ESP did not materialize.

Parapsychology critic Ray Hyman has pointed out that remote viewing and other alleged forms of ESP were defined negatively -- that is, as an effect remaining after other normal explanations had supposedly been eliminated. Therefore, he noted, a mere glitch in the experimental data could thus be counted as evidence for psychic phenomena. Again and again, seemingly "successful" experiments could not be replicated, and mainstream science has not accepted psi as actually existing.
(For more, see the various subject headings in Gordon Stein, ed., "The Encyclopedia of the Paranormal," Amherst, NY: Prometheus Books, 1996.)

Items in the ESP Exhibit Collection 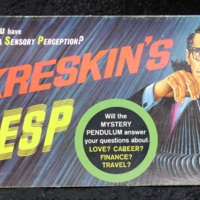 This Milton Bradley outfit tapped the popularity of the Amazing Kreskin, who once had his own television show. Born George Joseph Kresge Jr. in 1935, Kreskin performed as a "mentalist." As distinguished from a psychic, a mentalist uses magic tricks… 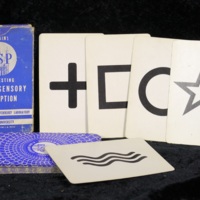 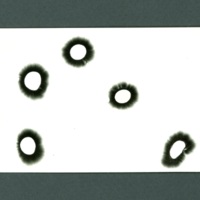 Photo showing corona discharge around five fingertips. (Label stuck on back has penciled name of subject.)

The technique known as "Kirlian Photography" was supposedly invented in 1939 by a Russian electrical technician, Semyon Kirlian, but was…