The East -- i.e., Asia (often poetically called "The Orient) -- includes two of the world's major religions, Hinduism and Buddhism (Hinduism discussed separately). Both originated in India, although Buddhism later spread throughout the East.

One of the world's dominant religions, Buddhism originated about 500 BCE in India, where it has largely been replaced by Hinduism. It spread throughout the East (Asia), including China, Korea, Tibet, and Japan. Its founder, Prince Gautama Siddhartha (ca. 563-483 BCE), was called "Buddha," meaning "enlightened one." He began by teaching and founding an order of monks. Buddhists believe his death was attended by signs and portents, and he has been made a deity, the first in an ongoing line.
Buddhism is a religion without gods. It teaches that the self is impermanent and that the goal of following its path is to break the chain of Karma (in which good or bad deeds are rewarded or punished in this or successive lives) and to thus achieve nirvana (the end of sensory cravings and release from the rebirth cycle).

Taoism is a deistic religious and philosophical system in China. It was founded by Lao Zi in the sixth century BCE, although its scriptures -- which teach the tao or "way," the universe's hidden principles -- date from some three centuries later. Buddhists and Taoists once persecuted each other but they eventually assimilated, and Taoists came to develop Buddhist-like monasteries.

The East is also rich in folklore, China's being especially so. The earliest Chinese histories tell of Emperors who ruled the universe (those of Heaven, Earth, and Mankind). Early folk elements included yin-yang (positive-negative forces of nature -- like heaven-earth, male-female, and so on -- that were in balance), as well as divination and folk medicine. 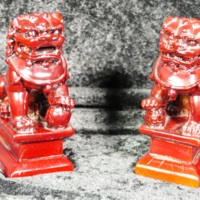 Traditional Oriental guardian figures were often placed on either side of entrances, especially to religious sites. This matched pair represents the conventional figures: a male (signified by an orb under his paw) and a female (with a pup under her… 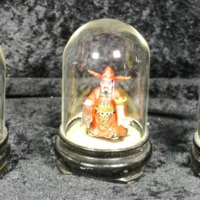 These Chinese figures represent the three universal aspirations: Fu, with his scroll symbolizing prosperity; Shou, with a staff and peach; and Lu, with the winged hat and other symbols of high office, evoking power. 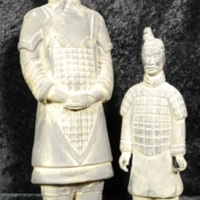 Terracotta warriors of China represent one of the great archeological discoveries of the 20th century. Shown here are miniature reproductions of two of the original 8,000 life-size warriors. The buried army was created at the order of China's first…