African religions/mythologies are too extensive and diverse to characterize in a few words. However, among common elements are worship of supernatural entities and the ancestral dead. Many narratives feature such animal trickster figures as Hare (who became the wily Brer Rabbit in African-American folklore). The West African Yoruba people also have a trickster god named Eshu who serves as a messenger (rather like Judeo-Christian angels) and mediates between man and other gods, as well as playing a key role in divination, an essential element of Yoruba culture.

The Fon people have a creation myth in which the Creator is androgynous and dual-faced, representing the male sun and female moon; as the world was being shaped, the Creator was carried in the mouth of a cosmic serpent named Aida-Hwedo. Again, many African cultures have a myth that explains the origin of death. For example, Zulus relate how the Creator sent Unwabu, the chameleon, to tell humans that they would not die, and the lizard Intulo to say that they must; but while the chameleon dawdled, the lizard ran straightaway and so the message of death was the first to arrive.
(For a further discussion, see Neil Philip, "Myths & Legends," New York: DK Publishing, 1999, 86-89; Maria Leach, ed., "Funk & Wagnall's Standard Dictionary of Folklore, Mythology, and Legend," New York: Harper & Row, 1984, 18-24.)

Tribal African art expresses many of these beliefs and themes. Their artworks were rarely purely aesthetic but rather meaningful and functional, being related to various social and magical rites that linked them to the supernatural realm.
(See Jean-Baptiste Bacquart, "The Tribal Arts of Africa," New York: Thames and Hudson, 1998.)

Items in the African Beliefs and Mythologies Exhibit Collection 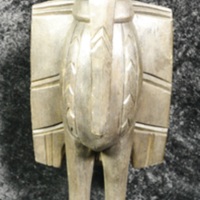 A "Guardian Bird" from Mali (the Republic of Mali in northwestern Africa), carved of native wood by the Senufo tribespeople, whose arts have been admired by western culture. This type of Guardian Bird is usually said to watch over young initiates to… 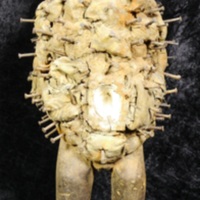 In the Congo (also spelled "Kongo"), people may seek, in a crisis, to obtain a spirit's protection by driving nails into its carved wooden likeness and shouting at it. Powerful substances like roots and other fetish materials - called nkondi - may… 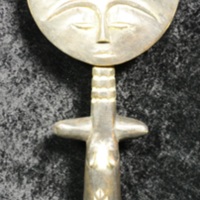