America was discovered not by Columbus, or even the earlier Vikings (who explored coastal Nova Scotia and Newfoundland), but by Nomadic Asians, who crossed the Bering Strait, which was frozen during the last Ice Age. Because Columbus thought he had reached India, these original Americans are still often called "Indians," although "Native Americans" is preferable.
Their diverse cultures created highly imaginative mythologies -- passed down through the generations by story-tellers who were not constrained by rigid literary forms. Their myths intertwined the natural and spiritual worlds that represented the totality of their beliefs -- philosophy, religion, and science. Theirs were strikingly diverse cultures -- as different as the Apache of the North American plains and the Maya of Mesoamerica -- the latter characterized by impressive temple complexes, a calendrical system, hieroglyphic writing, and an elaborate mythology with numerous gods and goddesses, at least 166 with names.
Native American mythology includes the False Face beliefs and performances of the Iroquois tribes, in which men wore carved wooden masks, dressed in bearskins, and carried tortoise-shell rattles, visiting villages to provide protection against disease. The Ojibway and some other Algonquins used the term "Manitou" to describe the supernatural beings with the greatest power and their all-pervasive spirit essence. And among countless other examples, the Mandan (Sioux tribe) shaman used his spiritual powers and ceremony to give the dead the necessary respect to enable the soul to return to the spirit world.
(See David M. Jones and Brian L. Molyneaux, "Mythology of the American Nations," London: Hermes House, 2004, and Maria Leach, ed., "Funk & Wagnall's Standard Dictionary of Folklore," New York: Harper & Row, 1984.) 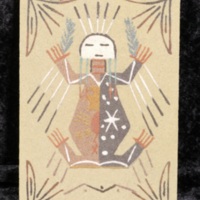 This Navajo sandpainting is typical of those originating in Navajo healing ceremonies. A medicine man creates a sandpainting and places the person to be healed in the middle. Then, to aid the process, sand from the painting is rubbed over… 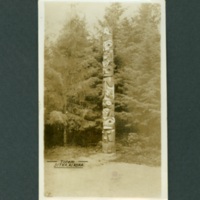 This photograph is of a totem pole in Sitka, Alaska, circa 1940. Sitka is known for its totem poles, created in 1906, which are located within Sitka National Historical Park. 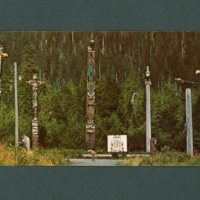 This postcard shows "A group of interesting poles in Saxman Park, Ketchikan, Alaska." 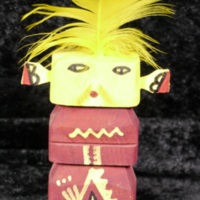 Although this wooden doll is maked "Navajo" on the bottom, indicating it was made by Navajo craftspeople for commercial purposes, true Kachinas are a tradition of the Hopi people, who are part of the Pueblos, Native Americans of the southwestern… 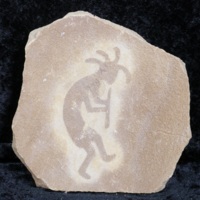 The Kokopeli figure is produced in imitation of the ancient petroglyphs (rock carvings) found in the American southwest and dating from 200 AD to the sixteenth century. The name of the mystical flute player, Kokopeli, is believed to be derived from…