Phrenology is a form of character reading (like graphology and physiognomy) as supposedly revealed by the individual contours of the subject's head. The term was introduced in 1815 to refer to a "physiognomical system" of two German doctors, Franz Joseph Gall and John Spurzheim, who gave phrenological readings and lectured on the subject in the eighteenth and early nineteenth centuries. Phrenology flourished during the latter century due to the publishing and merchandizing efforts of the Fowler brothers, Orson S. and Lorenzo N., together with their brother-in-law, Samuel R. Wells. The company, Fowler & Wells, was headquartered in New York City with a branch in Philadelphia.

Actually an expansion of the earlier ideas of a Viennese philosopher named Prochaska, phrenology is predicated on four principles: (1) that the organ of the mind is the brain, (2) that man's mental powers are analyable into specific independent faculties or personality traits, (3) that these are innate, with each being in a specific area of the brain, and (4) that the size of each respective area indicates the weakness or strength of the trait with which it is associated.

Treatises on the new "science" of phrenology invariably contained a "map" of the head, illustrating the (usually) 35 regions, although these were arrived at by questionable logic, limited models, and other dubious means. Anatomists pointed out also that the regions posited by Gall and Spurzheim did not accord with definite cerebral surface areas and that brain contours could not meaningfully be determined by the skull's external shape. Ambrose Bierce, in his "The Devil's Dictionary" (1911), defined phrenology as "The science of picking the pocket through the scalp. It consists in locating and exploiting the organ that one is a dupe with."

A modern critic of phrenology was the late Robert McCoy, who for years operated The Museum of Questionable Medical Devices in downtown Minneapolis. (For his obituary, see Joe Nickell, "The Real McCoy," July 2, 2010; online at http://centerforinquiry.net/blogs/entry/the_real_mccoy/; posted July 2, 2010.) McCoy's discussion of Phrenology (in Gordon Stein's "The Encyclopedia of the Paranormal," Prometheus Books, 1996, 527-34) is recommended reading. The accompanying photograph shows Joe Nickell fitted by McCoy with a "Psychograph," an early twentieth-century phrenological device that -- adjusted to one's head -- gave readings in printout form.

McCoy concluded, "Although phrenology cannot be shown to have any scientific basis, it had some beneficial aspects. Some personality traits and behaviors that it analyzed came to be regarded as innate qualities that could be improved upon or changed, rather than expressions of intrinsic evil or works of the devil to be punished," (in Stein 1996, 534).

Items in the Phrenology Exhibit Collection 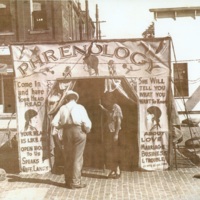 This circa 1940's black and white photograph was likely made at a street fair. Conversing with a couple, the reader (blocked from view by the man) is portrayed by the banners as a gypsy. The appeal to phrenology (as if it were a science and not a… 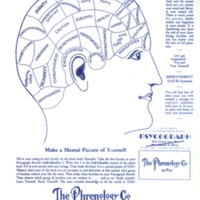 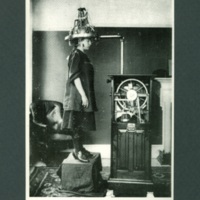 Modern reproduction of a postcard featuring a 1905 photograph of a woman using a psychograph machine on the front side of the postcard. 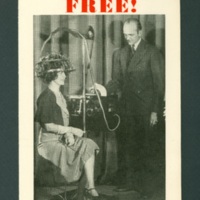 Pamphlet circulated in "theatres" advertising the tour of the psychograph machine, encouraging patrons of all ages to attend the presentation of the machine and undergo a phrenological character reading by use of the machine. 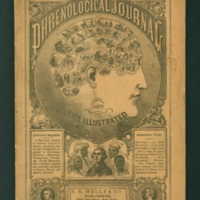 Original April 1876 copy of "The Phrenological Journal," a "scientific" magazine of the time discussing serious implications of the science of character reading through phrenology and its various techniques for reading the character of a person.