Apparitions of the Virgin Mary are among the important miracle claims of the Catholic Church -- so much so that critics have sometimes referred to the practice as “Marianity.” Often they involve children (notably at La Salette, France, 1846; Lourdes, France, 1858; Pontmain, France, 1871; Fatima, Portugal, 1917; Garabandal, Spain, 1961; Medjugorje, Yugoslavia, beginning in 1981). When an adult, the visionary is likely to be a female (Catherine Labouré in Paris, 1830; Maria Fioritti, Pescara, Italy, 1988; Nancy Fowler, Conyers, Georgia, 1990; Theresa Lopez, Mother Cabrini Shrine near Denver, 1991).
“Visionaries” tend to be highly imaginative, even to have fantasy-prone personalities. Their apparitional figures are similar to other religious individuals’ guardian angels, Spiritualist mediums’ spirit guides, and alien abductees’ extraterrestrial entities -- that is, versions of the proverbial imaginary friend. Some cases are atypical; for example, evidence indicates that the 1961 Marian visitations at Garabandal were a hoax.
(For discussions, see Joe Nickell’s Looking for a Miracle, 1993, 145-153, 167-208; and The Science of Miracles, 2013, 225-239, 249-267.)

Items in the Virgin of Guadalupe Collection Collection 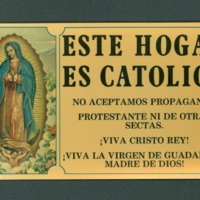 This sign, meant to hang near the entrance of a house, features a typical image of the Virgin of Guadalupe and reads: "This House is Catholic. No Propaganda is Accepted from Protestant or Other Sects. Long Live Christ the King! Long Live the Virgin… 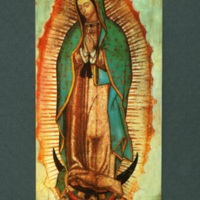 This pro-life devotional card features an image of the Virgin of Guadalupe on the front of the card and on the back gives a message and a prayer on the topic of "spiritual adoption" of unborn babies. 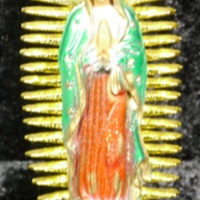 This small figurine of the Virgin of Guadalupe is made of molded plastic, with the aura molded separately and attached, and includes a magnet in the base of the statuette. 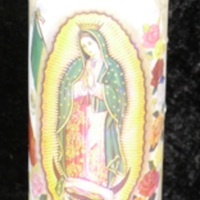