Hinduism is the popular religion and philosophy of India, originating some 4,000 years ago. It is polytheistic, yet has the concept of a supreme spirit. The divine manifestations include the Trimurti, or triad of chief deities: Brahma (Creator), Vishnu (Preserver), and Siva or Shiva (Destroyer). The supreme being is Brahman. This is an abstract world-soul into which each individual soul is absorbed when its cycle of rebirth ends, for Hinduism is based on reincarnation and karma (the totality of one's actions transferred from one life to the next, thus resulting in a better or worse fate).
The Hindus' sacred lore is contained in over 100 books or Vedas (Veda means in Sanskrit "divine knowledge"). The chief four of these contain, in turn, the oldest texts; the chants and hymns; prayers and spells; and various popular materials. Of varying age, the Vedas are believed to have come from Brahma or to have been revealed to the rishis (holy men). The oldest may date from as early as 2000 BCE, and they are distributed over a very long period of India's history.
(See Maria Leach, ed., Funk & Wagnall's Standard Dictionary of Folklore, New York: Harper & Row, 1984; Webster's New Universal Encyclopedia, New York: Barnes & Noble, 1997.)

Items in the Hinduism Exhibit Collection 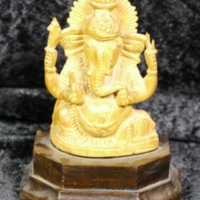 Ganesha (or Ganesh) is the lord of hosts, the god of wisdom and prudence. Depicted as a man with an elephant's head, he is worshipped as a remover of obstacles. This Ganesha statuette is from India and is carved from fragrant sandalwood. 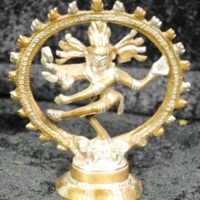 Hindu mythology is rich in symbolism. Shiva is the name of the Universal Godhead -- divine creative energy. Portrayed as a dancing figure in a ring of fire, Shiva depicts the cosmos coming into being. 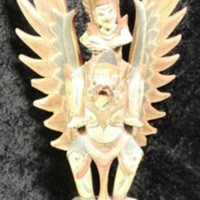 Vishnu is one of the triad of gods in Hinduism that represent the three aspects of the supreme or absolute spirit, the Brahman. Brahma is the creator of the cosmos, Vishnu the Preserver, and Shiva the destroyer. Vishnu supposedly had nine… 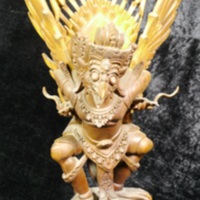 Vishnu's steed is the supernatural Garuda, a large mythical bird-like creature, shown in this wood carving.